Over the next few months, BALID will bring you a series of blog conversations following BALID’s last interactive Informal Literacy Discussion (ILD) on the theme of ‘applying visual and sensory literacies in refugee research and practice’. Taking some definitions of visual and sensory literacies as a starting point, the blog series will look at further examples of its use in research, teaching, and arts practice, as well as raising important considerations around ethics, voice, and agency.

The first post in this series could be accessed here.

Arrival of the Ararat

The first refugees to be given sanctuary in the small town of Riace, in Calabria, Southern Italy, were Kurdish. Their sailing boat (named Ararat, an ironically apt name for people seeking sanctuary*) washed ashore in 1998, an event that marks the beginning of a period of unprecedented refugee hospitality in Riace, that subsequently extended its welcome to people fleeing Africa, the Middle East and Asia.

Twenty years on, in October 2018, a change in Italian law, motivated by the government’s increasingly hostile anti-immigration policies stripped many refugees of their humanitarian status in Italy, and the majority of those resident in Riace were forced to leave. However, left behind in the now quiet streets is a valuable archive of street art, that reveals the impulses that underlie the town’s extraordinary openness and generosity to refugees, and which connects Riace’s recent story to its long history.

Up to the end of the 1990s, Riace had experienced constant poverty caused by drought, economic decline, isolation, and organised crime, that resulted in successive waves of emigration to northern Italy, northern Europe, the USA, and beyond. Its medieval historic centre, with its remaining population aging and many of its houses abandoned and dilapidated, seemed destined to become a ghost town.

In 1998, to accommodate those first refugees, town councillor Domenico Lucano, who later became mayor, proposed and spearheaded an innovative humanitarian solution: by providing sanctuary, homes and jobs for the refugees, the town could be physically rebuilt and demographically and economically rejuvenated. This reciprocal exchange grew over the following twenty years into what became known as the ‘Riace Model’ of hospitality and integration, welcoming many thousands of people originating from more than 20 different countries, who brought with them a repertoire of many languages. The nearly-abandoned medieval town, previously isolated and remote, became a place of contact, connection and change, with the exchanges of ideas and cultures creating a new globalised community brought together under, or in solidarity with, the Riace model.

As Riace developed a new identity as an open and welcoming ‘global village’, a distinctive multi-modal linguistic and semiotic landscape, comprised of signage, public art and murals, was simultaneously created through civic participation and the sponsorship of professional street artists. This ‘solidarity-scape’ became the backdrop to local life and an integral part of campaigning and activism, locally, online, and in the news.

Despite the termination of the Riace Model in 2018, its traces remain woven into the fabric of the town. The public art, and its reproduction in digital images, act as metaphors or metonyms for the Riace Model’s philosophies of solidarity, progressive politics and positive refugee inclusion, and it is these elements that interest me in my research. Using the methodological approach of linguistic landscapes to look at multi-modal forms of communication (signage and visual images, both with and without text), I aim to understand the ideology underpinning their creation, and their subsequent digital deployment.

Notable in Riace’s street art are the many recurring themes that I believe fit under a broader thematic umbrella of solidarity. From welcome signs greeting you in various languages, the use of flags (e.g. the representation of many nations within numerous artefacts, the recurring use of the ‘peace’ flag’s rainbow colours, and the colour-palate of Pan-Africanism), anti-mafia sentiments and commemorations of mafia victims, to naïve or folk art representations of global figures of resistance or revolution – the art and artistic expression in Riace all appears to have been created through an expression of solidarity. This language of international solidarity, encompassing progressive, pro-immigration and anti-mafia philosophies, and a recognition of the unequivocal correlation of southern Italy’s history of emigration with contemporary immigration has, in my view, been the principal inspiration underlying Riace’s extraordinary refugee welcome project.

Here’s the word cloud generated during March’s Informal Literacy Discussion in response to our digital walking tour. It shows reactions and sentiments inspired by some of Riace’s artefacts, such as “welcoming”, “inclusivity” and “solidarity”. It was lovely to see that “warmth” appears at the centre and in larger font, indicating that this response was chosen more than once. 😊 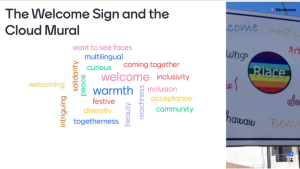 If you would like to see the creative process in action, I recommend two videos available on YouTube:

For further information on Riace or linguistic landscapes research in a refugee context, please email me on cbb711@student.bham.ac.uk.

*The mountains of Ararat, located in the east of modern-day Turkey, were (according to interpretations of Genesis 8:4) believed to be the landing place of Noah’s Ark once the flood waters began to recede.

Katie Blair is undertaking a PhD in Modern Languages at the University of Birmingham, researching the ‘Riace Model’ of refugee resettlement. Her study looks at identity, inclusion, and activism in multimodal solidarity-themed street art through digital linguistic landscapes analysis.